Saint Llawddog , or Lleuddad , ( fl. 600? ), is said to have been the son of Dingad ab Nudd Hael , king of Bryn Buga (i.e. Usk ), and Tefrian or Tonwy , daughter of Lleuddyn Lwyddog . Few details are known about his life, but tradition maintains that he worked many miracles. He appears to have forsaken his father’s kingdom in order to live the life of a religious recluse with his brother BAGLAN in Caernarvonshire . His later years are linked with the isle of Bardsey . He was chosen abbot of the island’s religious community, and is said to have ended his days there. A Welsh ‘ Life of S. Llawddog ’ is preserved in National Library of Wales (late 16th cent.). The churches of Cenarth, Penboyr, Llanllawddog in Carmarthenshire and Cilgerran in Pembrokeshire were all originally dedicated to Llawddog. His memory is also perpetuated in the local topography of the places so named, in the form Lleuddad, in parts of the Llŷn peninsula . His feast-day is variously given as 15 Jan., 21 Jan. or 10 Aug.

The local parish Church is dedicated to Saint Llawddog. Although the present building is relatively modern, it is on an important ancient site, and was the “bishop house” of the Cantref of Emlyn.

Within the Churchyard is a stone with Ogam Scrip, still visible and a stone’s thow away on the south side of the river is the Holy Well of St Llawddog. 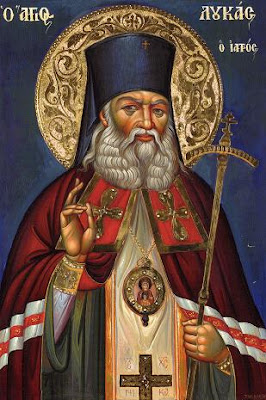 The relics of Saint Luke the Surgeon; a great saint of the 21st Century, unmercenary healer and miracle worker will be brought to the church of St Luke, Birmingham this Saturday. The relics of Saint Seraphim of Sarov and Saint Heraklidios of Cyprus will also be brought with those of St Luke.
Saturday 18.30hrs
welcoming of the relics of St. Luke of Simferopol and Crimea, accompanied by the Metropolitan Isaiah of Tamassos and Orinis and straight after Vespers.
The Life of Saint Luke of Simferopol by (ISBN:
9780971413900)

“S. Lhud, that is anger; she is commonly called S. Alud or Aled, but Giraldus Cambrensis calls her Almedha … It seems that having from her infancy dedicated herself solely to the service of God, in her riper years, being violently pressed by a young prince to marriage, to free herself from his solicitations and those of her family, she secretly stole away from her father’s house in a disguise, resolving for a time to conceal herself in the neighbouring villages … The first she retired to was the village of Llandew, where she was so ill treated that, fleeing from hence she retired to a village called Llanfilo, three miles further, to live in greater obscurity, which, joined with her poverty, beauty in rags, was the cause she was treated as a common thief. From thence, fleeing back again to another village called Llechfaen, within a mile of Brecknock, where she was treated with such scorn and contempt that nobody would receive her, but forced her to lie in the street and the high road, which ever since is called of her name in Welsh, Heol S. Alud. After which she resolved to retire to some solitude, never more to converse with mortals; and such a solitude she found upon a hill called the Slwch … near the town of Brecknock, which was then overgrown with wood. Here, that she might receive no further insults, she desired the Lord of the Manor to give her leave to dwell, which was very courteously granted, with a promise of other charity, upon which she there built her a little cell or oratory and was used often to go down to the Castle of the Slwch to beg for bread, where she was very hospitably received.

“When her thoughts were settled in a little tranquility after all these storms, by way of prophecy she said: That by the secret judgment of God a chastisement would rest on the village of Llandew for the injuries done to her; that the village of Llanfilo would be plagued with thieves, as they are to this day above all others, and the village of Llechfaen with envy, as indeed they are almost continually in contention and law with one another.

“But this sweetness did not last long; her importunate lover went to her retirement where, finding her alone at prayers, a violent fear surprised her soul, so that she sought to flee down to the Lord’s house at the bottom [of the hill], which the young Prince perceiving, mad with rage and despair, pursues her, cuts off her head which, rolling a little down the hill, a clear spring of water issued out of the rock where it rested. This being presently known, she was taken up and buried in her own little cottage, which was thereupon turned into a chapel.”

Giraldus Cambrensis. writing at the end of the twelfth century, says:

“In her honour a solemn feast is annually held here [in her chapel] in the beginning of August, and attended by a large concourse of people from a considerable distance, when those persons who labour under various diseases, through the merits of this blessed virgin, receive their wished-for health. The circumstances which occur at every anniversary appear to me remarkable. You may see men or girls, now in the church, now in the churchyard, now in a dance, which is led round the churchyard with a song, on a sudden falling on the ground as in a trance, then jumping up as in a frenzy, and representing with their hands and feet. before the people, whatever work they have unlawfully done on feast days; you may see one man put his hand to the plough, and another, as it were, goad on the oxen, mitigating their sense of labour by the usual rude song; one man imitating the profession of a shoemaker; another that of a tanner. You may see a girl with a distaff, drawing out the thread, and winding it again on the spindle; another walking and arranging the threads for the web; another, as it were, throwing the shuttle and seeming to weave. On being brought into the church, and led up to the altar with their oblations, you will be astonished to see them suddenly awakened and coming to themselves. Thus, by the divine mercy, which rejoices in the conversion – not in the death – of sinners, many persons, from the conviction of their senses, are at these feast days corrected and amended.”

The ‘Slwch tump’ – an iron age fort where we think Eluned had her cell.

Deiniol, born in the early 6th century, was an important figure in the development of Christianity in North Wales. The son of a Celtic chieftain, he founded two monasteries, both named Bangor, one of which was close to the modern town of that name…