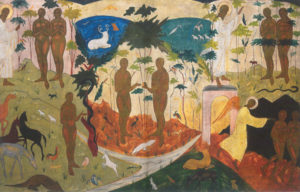 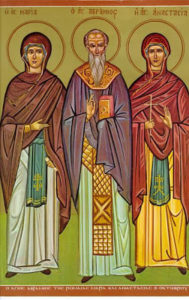 I have a new article published in the Orthodox Arts Journal  – From Cubism to the Romanesque (to the Orthodox icon?). It follows on from my previous piece about the attempt of Charlemagne and his court to attack the Seventh Ecumenical Council and the veneration of icons. In that article, drawing on the arguments of the Cubist painter, Albert Gleizes, I drew a distinction between ‘rhythmic’ art and figurative or imitative – representational art. For all its stylisation and ‘abstraction’ the icon is a representational art, it embodies a ‘likeness’ to the Person represented. The question then is what role if any an essentially rhythmic approach, such as was, or may have been, embodied in Romanesque art, can play. 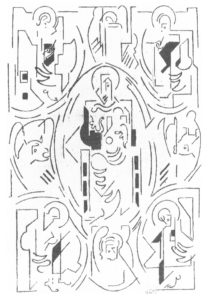 A ‘rhythmic’ Christ in Glory surrounded by the Evangelists by Albert Gleizes. 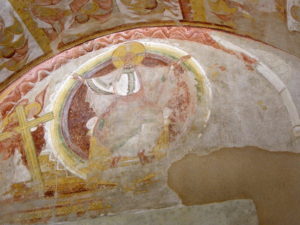 An article I have written has been published by the online Orthodox Arts Journal under the title The Seventh Ecumenical Council, the Council of Frankfurt and the Practice of Painting. The Seventh Ecumenical Council in 787 AD gave authoritative approval to the veneration of icons. The Council of Frankfurt (794 AD) was summoned by Charlemagne as part of his project of distancing the Western Church from the Roman Empire centred on Constantinople. Charlemagne wanted to condemn the practise of venerating icons but was inhibited by the Pope (Hadrian I). I am arguing that although this was all obviously political there was a real difference between the classical culture of Rome and the culture of the peoples gathered round Charlemagne who had never been part of the Empire, most notably the Celts (Irish and Welsh) and Anglo Saxons (in particular the Northumbrians who had been converted to Christianity from Ireland). The main texts arguing for the veneration of icons, by St John of Damascus and St Theodore the Studite, were unknown in the West, but if they had been known, I suggest that the ‘insular’ monks would not have understood them. The argument was based on the idea that the artist’s job was to produce a likeness of something in the natural world. The insular (Celtic/Anglo Saxon) idea was quite different. I characterise it as ‘rhythmic’ and try to give a summary account of it. 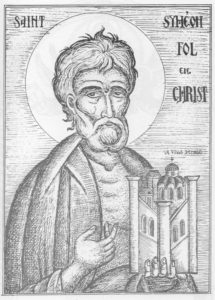 ‘Verily I say unto you, they have their reward’
Matt 6.2

The gratification of being well regarded
is my reward.
My reward is a stone
that pulls me down.
I must get rid
of my reward.

The eyes of men
are so many knives
cutting me up; under their gaze
I become
Legion. I pass like a whore
from one to the other
like so many pieces
of a smashed mirror.

That is how the days
pass; to flee
from the snare, I must be
ridiculous,
like Lazarus
lying at the rich man’s gate.

I must climb under
my reward, then, free
of other men’s eyes
I can see
objectively.
I can see the angels
outside the brothels
and round the walls
of the churches the devils
and in the depths
of winter, dressed
only in rags, lying
in the gutter I can taste
the fruits of Paradise.

In an Orthodox Church

IN AN ORTHODOX CHURCH 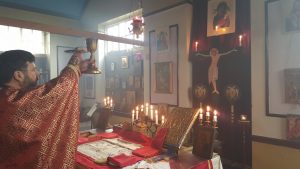 In this place,
everything is still, any
noise is a shock.
No-one is
laughing here,
in this place, above
everything that happens,
above and below
and inside and out.
It requires,
this everywhere,
silence and darkness.
This is the most dear
habitation,
above thinking, here thinking
is a distraction,
demons, dreams and wishes
are only a nuisance.
The vibration of
strong emotion shrinks
this space, which is
normally very big, any
contrary vibration, contrary
space (e.g.
cyberspace)
is ruinous.
In this place what was
continuous has become saccadic,
what was saccadic
has become continuous.
I am living in an un-
finished dot drawing.
This is the house of prayer
where David went.
I am huddled in a dark
corner of his tent.
Here I have not seen God,
but I (and everyone with me)
have known a lovely
darkness from too much light.