From Strata Florida, take the B4340 four miles east to Tynygraig. At Ystrad Meurig take a sharp turn left onto a steep road (signposted ‘Swyddyfynnon’) and after half a mile turn right onto a narrow lane to Llanwnnws.

This porch of this remote church contains a very fine inscribed early Christian monument. The stone reads: XPS Q[U]ICUNQ[UE] EXPLICAU[ER]IT H[OC] NO[MEN] DET BENEDIXIONEM PRO ANIMA HIROIDIL FILIUS CAROTINN: ‘(The Cross) of Jesus Christ. Whoever shall (have) read this name, may he give a blessing for the soul of Hiroidil son of Carotinn’. The formula, lettering, language and cross-from all suggest a ninth-century date.

Latin inscribed stones  such as this are our earliest significant remains of the early churches in Wales. This one follows a formula found elsewhere (for example the Pillar of Eiliseg in Llangollen and on monuments in Ireland) which exhorts the viewer to pray for the dedicatee of the monument, Hiroidil son of Carotinn, by saying the name of Jesus, which is the name inscribed in contracted form in Greek capitals XPS, i.e. Christus (with a contraction mark on the middle letter), on the top of the stone.

A monument such as this was likely to have stood in a visible place. At Maen Madog in Glamorgan we find one such stone by the side of a Roman road. Often they were taken into churches for preservation, so we do not really know where this one was originally placed. 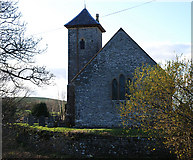