The vocal ensemble Resurrection – Voskresenije in Russian – was founded by Jurij Maruk in 1993. It consists of seven to ten professional female and male vocalists. The repertoire of the ensemble includes Russian Sacred Music as well as folk music. Guest performances in Germany, Switzerland, Norway, Austria, the UK, France and Italy have met with great success, and the choir has recorded several CDs of their repertoire, which includes some specially composed arrangements of Burns songs by John McIntosh. 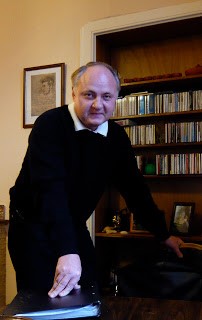 Their conductor, Jurij Maruk, was born in 1961 in Barnaul, West Siberia. In 1976 he began to study music and conducting at the local music facility in Barnaul. After finishing musical school he was admitted to the Novosibirsk State Conservatory (1980-1985) in Professor Boris Pevsner’s class. At this time he worked with the Chamber Choir (Novosibirsk) directed by Pervsner, who was working in close cooperation with the Wladimir Minin Choir in Moscow. Between 1987 and 1989, Jurij Maruk worked at the Mariinsky Theatre (opera and ballet) in St Petersburg as a choir singer. Here he had his initial experience as a conductor and artistic leader of the Mariinsky Theatre (sacred music). Between 1990 and 1992, Maruk worked as the choirmaster of the St Petersburg Radio and Television Choir.