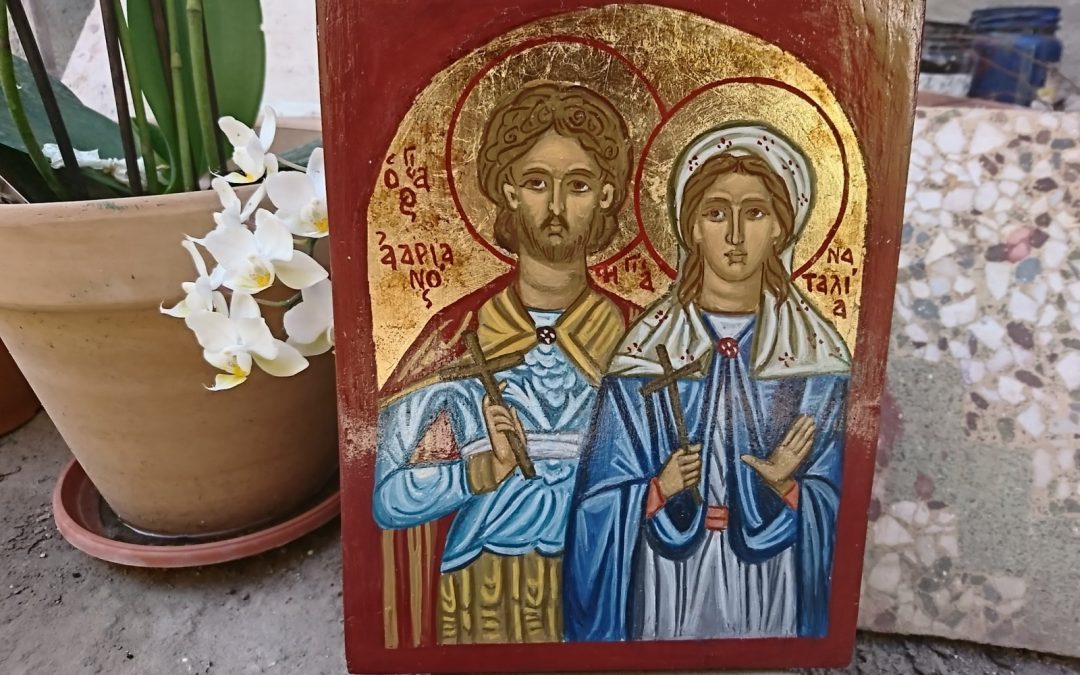 Ss. Adrian and Natalia were pagans who were married for one year prior to their martyrdom, and lived in Nicomedia during the time of Emperor Maximian in the early fourth century. The emperor promised a reward to whomever would inform on Christians to bring them to trial. The denunciations then began, and twenty-three Christians were captured in a cave near Nicomedia.

They were tortured, urged to worship idols, and then brought before the Praetor, in order to record their names and responses. Adrian, the head of the praetorium, watched as these people suffered with such courage for their faith. Seeing how firmly and fearlessly they confessed Christ, he asked: “What rewards do you expect from your God for your suffering?” The martyrs replied: “Such rewards as we are not able to describe, nor can your mind comprehend.” St Adrian told the scribes, “Write my name down also, for I am a Christian and I die gladly for Christ God.”

The scribes reported this to the emperor, who summoned St. Adrian and asked him, “Really, have you gone mad, that you want to die? Come, cross out your name from the lists and offer sacrifice to the gods, asking their forgiveness.”

St. Adrian answered, “I have not lost my mind, but rather have I found it.” Maximian then ordered Adrian to be thrown into prison. His wife, Natalia, knowing that her husband was to suffer for Christ, rejoiced, since she herself had secretly turned from paganism to Christianity.

She hastened to the prison and encouraged her husband saying, “You are blessed, my lord, because you have believed in Christ. You have obtained a great treasure. Do not regret anything earthly, neither beauty, nor youth (Adrian was then 28 years of age), nor riches. Everything worldly is dust and ashes. Only faith and good deeds are pleasing to God.”

Troparion (Tone 4) –
Your holy martyrs Adrian and Natalia, O Lord,
through their sufferings have received incorruptible crowns from You, our God.
For having Your strength, they laid low their adversaries,
and shattered the powerless boldness of demons.
Through their intercessions, save our souls!